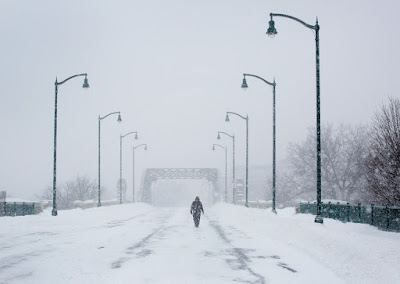 “Melissa...?” Aiden remembered her in the hotel room with him. But where was she now?
He felt more bandages stuck to the side of his neck. Taking the railing, he successfully pulled himself onto his feet this time, and winced. His ankle ached, too. Pulling up his pant leg, he saw a brace keeping it steady.

Aiden looked around. The silence was only broken by the whistle of winds, and nothing else.

Melissa didn’t reply. Not even any people were in sight. The tarps draping all around him made it impossible to tell how far in the pedestrian walkway he was.

Hugging his throbbing arm to his chest, he limped over piles of melting snow, his head buzzing and vision blurring. He squinted ahead as he pushed through the torn up tarps.

How long had he been unconscious? Where was all of his stuff? Why did Melissa leave? Aiden looked at some of the tarps, and the red snow all over the bridge.

He shuddered, and pressed on.

Then stumbled to a stop.

A quarter of a mile in front of him were rows of several cars, all jam-packed in the middle of the bridge. The ground was made up of support brackets. The suspender and main cables were the only things holding the bridge together and the tarps overhead. Abandoned cars were halfway suspended over the fragmentary surface.

As Aiden peered through the fog and snowfall ahead of him, he couldn’t even see the other side of the unfinished bridge.

He whipped his head towards a scream, coming the way he limped from.

“Help me! H-help! PLEASE, SOMEBODY!” a young man pleaded.

With his bandaged forearm clutched to his chest, Aiden hobbled towards the voice, and froze.

Weaving between the lines of cars and through the draping tarps, a man wearing a parka was running towards him. Aiden’s eyes narrowed at the young man.

Something was following him. Gangly and gray-skinned that looked as if it was peeling; it stood about eight feet tall, and wore a hooded coat that covered its head. In a quick glimpse, the hoodie figure had no face — only a mouth far too wide and grinning the entire time as it preyed on the screaming man.

Aiden instinctively went for his gun. Like everything else, he learned that to be missing as well.
He cursed under his breath, ducking behind one of the crashed cars to peek through a shattered window.

Powerless, he didn’t want to watch. He couldn’t look away, either. The hoodie figure did not laugh, or make a sound despite its jovial appearance. It kept smiling as it caught up to the running man, kicking him to the ground by slamming its heel into the back of the man’s knee. He shrieked, falling face-first into the snow. The hoodie figure stood over him, its knees bone-thin as it crouched over the gasping man, still crying out for help.

When it held out its hand, Aiden caught a quick look of another mouth in its palm. Razor teeth, almost mechanical, rotated rapidly as it took the man’s wrist with its other hand.

Forcing the man’s fingers out, it stuck his thumb into the black hole of whirling razors inside its palm. The man let out a blood-curdling cry.

Aiden threw his back against the car. He looked around. The car door behind him had been left slightly ajar. He stuck his head in and searched for anything he could use as a weapon.

Crowbar. Yes, this would work. He snatched it. The stitches all up his forearm swelled with fire-pain as he squeezed the metal in both hands. He peered through the broken window again. The hoodie figure slid more of the man’s fingers through its palm; already it worked on his pinky.

Crouching, Aiden snuck from one car to another, out of the figure’s sight (assuming that it could see when it seemed to have no eyes). He stayed low, snow crunching as he moved to the next car. Closer to the scene.

Behind a green, beat up novacar, Aiden inhaled and steeled himself. Squeezing the crowbar in both hands, he craned his neck over the trunk—

Red bloomed over the snow where the man laid, face down. His hand was completely gone, blood spurting out of the arteries in his wrist. A golf ball-sized hole punctured his skull.

A shadow loomed over Aiden. He looked up to see the eight-foot tall figure balancing over the side of the truck bed. Its twisted grin bore down on him.

The hoodie figure dropped, its feet kicking his face. Aiden saw a flash of white. Pain in his jaw. He went to swing the crowbar that was no longer in his grasp. Neither was Aiden on his feet, but his ass. His legs scrambled backwards, pushing him to the ledge of the pedestrian path. His fingers outstretched, touching the cold metal of the crowbar next to him.
The eight-foot gangly freak loomed over him, holding its teeth-palm to Aiden’s face.

He swung the crowbar in front of him. Batting the thing’s arm away with a crack. It snatched Aiden with its other hand. All he saw was teeth. He had lifted the crowbar between him and the hoodie thing, an air of rotten fish reeking from its open razor maw. The thing leaned forward, drool dribbling down its lipless mouth.
Agony from the wound in Aiden’s forearm seared his skin. He bore it with his jaw clenched. The hoodie-thing went to take him by its teeth-palm again, and...

Using what little strength he had, Aiden hoisted the creature over him. It was skinny enough, clumsy enough that he sent it through the suspender cables.

Over the unfinished divider, separating the pedestrian path from a couple hundred feet over a freeway. Its hand clutched Aiden’s shoulder, slamming his back against the cables as the hoodie thing dangled.

“Let go!” Aiden demanded, dropping the crowbar to pry the thing’s fingers from his shoulder. Razors dug into his skin, sinking into the leather and fabric of his jacket and shirt underneath. Blood dribbled down his shoulder, over his chest. The teeth sunk deeper, almost widening its jaws over its prey.

Aiden heard himself yelling over the icy wind.

Just when he thought that the thing was going to rip his arm right off, a shot breezed by.
More blood gushed from Aiden’s side. This time, it wasn’t his.


Find out more about Seraphim STORM on the new official wiki!
Posted by R. Washburn at 2:06 PM